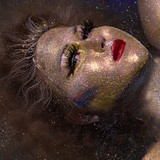 Savannah Pope is a glam rock songstress & creator from Los Angeles. Her critically acclaimed and award-winning catalog presents a riveting blend of classic rock ethos, soaring vocals, complex lyricism, and a distinctly modern voice. She is known for her golden vocals as well as her self-made, visually arresting videos and stage wear.  Paired with such artists as The Struts, Greta Van Fleet, and Starcrawler, Savannah is at the forefront of the classic rock revival scene.   Since breaking into a solo career just over two years ago, Savannah Pope has wowed fans and press alike with her indomitable artistic presence. She has already attracted an enthralled, ever-growing fanbase of "Creatures", armed with her unmistakable Glasses logo and message of "live your strange". Her debut album Atlantis released to much critical acclaim. LA Weekly then named her Best Hard Rock artist and Yahoo Music picked her Creature music video (which she animated frame by frame) for their top 20 catalog, marking her as a formidable underdog in a catalog of major artists.   Savannah recently debuted He Sees Me at Spotify's DeTour Fest in Los Angeles, as well as Freeway on Sirius XM's Volume West, hosted by AFI Frontman Davey Havok and Yahoo! Entertainment Editor Lyndsey Parker.   Savannah's new single You're Such a Human Being explores her recovery process from PTSD after being kidnapped and abused by the Troubled Teen Industry at fourteen.