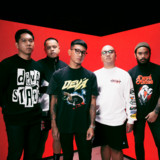 Avhath is a 5-piece unit from Jakarta, Indonesia. Officially established in January 2013. The band consists of Satan's Heir, BxP, KVVLT and SVNN, and YVD. The band members had also been involved on some respectable music projects in Jakarta, Indonesia scene such as For The Flames Beneath Your Bridge, Catharsis, Werewolf Does Calculus, and Disfare. Avhath's characteristics mostly epitomise the nasty concoction of dark, vigorous Black Metal riffs along with fast, energetic Crust Punk beats. In February 2019 they released their 10th release, an EP titled The Avhath Rites that launched them to a a new territory in Indonesian music scene. The first single, The Annual Horrors captures the eeriness of modern society, where the reality that everyone lives in has devalued itself into a mere spectacle. The track is fueled with unruly guitar and coarsely haunting vocal throughout the whole 2 minutes of the experience, which projects an uncanny yet subtle melodic ambience. It won an AMI Award for Best Metal Production Work. Later in November 2019, they re-introduced themselves in a musical presentation titled The Moon is Black and Red that collaborated with Yogyakarta based artist Natasha Tontey.