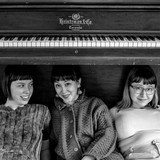 Featuring Only a Visitor

Described by CBC Music as one of 10 Vancouver acts to watch, Only A Visitor is a quintet that blurs genre boundaries by straddling the line between art music and pop. Composer and arranger Robyn Jacob's eclectic songwriting is guided by her decades long study in classical piano, her commitment to avant garde music, and her study of Balinese Gamelan. Her songs concentrate on unique vocal techniques and arrangements that take precedence over the traditionally grounding keyboard, bass and drums. With asymmetrical rhythms twisted around a pop skeleton, Only A Visitor makes room for themselves between pop and experimental music. In summer of 2017, the quintet released their first full length album Lines, which was followed by a tour of Eastern Canada, including appearances at the Montreal, Toronto and Halifax International Jazz Festivals. Joined by drummer Kevin Romain, bassist Jeff Gammon, and singers Emma Postl and Celina Kurz, Only A Visitor released their EP Tower Temporary in 2015. In the fall of 2016 composer Robyn Jacob completed a solo music residency at the Banff Centre, to begin work on the upcoming album Technicolour Education. http://onlyavisitor.com