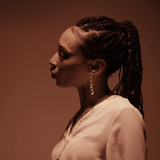 Hailed as the new Nina Simone, Caiine is a Cheshire based artist who started working with her current writing partner and producer back in 2017. Their work can be characterized as mellow, synth-filled, alternative R&B, that draws its influence from old soul and contemporary R&B. In January 2020 Caiine was honoured with a place on the BBC Introducing Hot List 2020 of top artists to watch this year. Her most notable releases are “Fools Weep”, “Century”, and “Subdivide”, all of which have gained exposure by BBC Introducing, BBC 6 Music and Amazing Radio. Caiine first found her love for performing and music in childhood and it’s been a highlight of her life ever since, being her safe haven when all else fell apart. She has been referred to as an old soul and it’s a phrase that fits her almost too well. In 2019 she played at Eskfest and Lancaster Music Festival, where she gave a particularly emotional performance. Caiine has released multiple singles, music videos and has gigged extensively throughout the UK. 2020 has already seen a live BBC Introducing radio performance, and there are many new releases planned as well as first appearances at some major UK festivals including Great Escape, Focus Wales and Fresh On The Net Live.