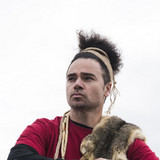 DRMNGNOW is an independent Artist based in Naarm/Birraranga (Melbourne). His sound and approach, grounded in strong cultural values fuses a striking interdisciplinary approach to his art as an MC, Instrumentalist and poet with a searing decolonial message. He has developed a reputation as one of the most important rising artists in the land with his live show known to transfix audiences. Has shared stages with artists such as Ethio Jazz legend Mulatu Astatke , Akala and Sampa the Great and is highly esteemed as cultural leader in the AU music world. Recent performance at Golden Plains festival was one of the festival highlights and in March performed at SXSW in the US. DRMNGNOW is driven by 100,000 plus years of ancestral force and it shows."