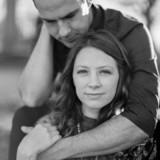 It started back in 2004, my freshman year at the University of Delaware. It was my first weekend there & my roommate invited me to take a bus with her to a local church. I remember the morning vividly. We approached the bus stop & there was Tyler, standing in the center of a small group of students, wearing khaki shorts & an olive green t-shirt. He was all-smiles & it seemed like the other students were naturally drawn to him. I was anyway. I picked a seat behind him on the bus & he turned around & introduced himself. We talked & then went our separate ways at church. I saw him around campus from time to time after that; he never remembered my name, at least for those first few weeks. Shortly thereafter, we started hanging out every day. Then we had a DTR. A few years later, we got married. Fast forward 12 years & we're living in Nashville with our 4 kids. We've lived a lot of life in the 11 years we've been here. We've released a slew of records & one of those, Faint Not, actually did a little something, making it possible for us to tour with bigger artists & catch the attention of record labels. That was pretty cool. Along the way, we felt a pull toward justice, specifically IJM (ijm.org). We love speaking about their work & made 2 covers albums (For Freedom) to raise $ for them. We want the music to help people to feel seen & known, especially by God. That's what our latest album, There Will Be A Song, is about. Should you take the time to listen, thank you.