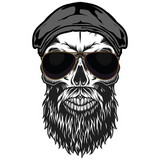 When you think of country-rock and americana music you probably think North America. So, Marc Miner is the European outpost. As if that weren’t enough Marc is also an international breed: His father from USA met Marc’s mother from Germany in Poland. That’s also where Marc was born, before the family moved to Vienna, where Marc grew up and started his first rock n roll, rock to even punk and grunge bands. By the age of 16 the rebelling Marc Miner left home, traveled half the world and landed in the South of the US. Beside gigging across the country he also started to gamble, which finally got him to jail. Marc was accused of illegal gambling, forging and other "trivial offenses" as he calls it. With some help from his father’s influential friends the US authorities finally amnesty Marc, but he had to leave this wonderful country. Back in Europe he finally settled down in Vienna. Here he does what he can do best: playing music in the good old tradition of americana music, country-rock and outlaw country but with an modern attitude like Hellbound Glory, Sturgill Simpson, Cody Jinks, Blackberry Smoke or The Steel Woods. In 2020 he released his debut album SMILE WHEN YOU'RE WASTED. In 2021 he released the first single GIRL GONE BAND from his upcoming album LAST HEROES. From time to time Marc Miner steps in front of a crowd or is producing records with songs for the outcasts, misfits, losers and broken-hearted.