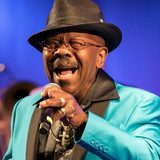 Born in Mississippi, raised in Memphis, and currently residing in Minnesota, where Willie has persevered in the vibrant Minneapolis music scene. Walker can often be found around the greater St Paul/Minneapolis area, performingπ with his group, We-R. In 2002 Walker put out a self-titled record, leading to fronting local band The Butanes, and Willie has been mesmerizing festival audiences in the US, Europe and South America, ever since. In the early 60s as a member of gospel’s Redemption Harmonizers, Willie developed the glorious, sublime voice we hear today. In 1967, friends in Memphis, introduced Willie to the

outstanding R&B, and Soul label, GoldWax Records. This is when and where he began recording secular music. Gold Wax later leased four of his recorded sides, for commercial release on the Chicago-based Checker Records. Most recently, Willie’s release on Little Village Foundation records, If Nothing Ever Changes, has earned him three Blues Music Award nominations; and put him on Living Blues Magazine’s Editor’s Top 10 Picks for 2015. Will won Living Blues Magazine Awards for Best Comeback Album of 2016; and Soul Blues Album of 2016. In 2017 Blue Dot Records released After A While, a joint effort with The Anthony Paule Soul Orchestra. This release led to 5 BMA nominations and Willie being voted Best Soul Blues singer in a Living Blues Magazine critic's poll. Sadly Willie passed away on 11/19/19, only three days after recording a yet to be released CD.