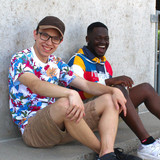 GROUP. is a Minneapolis songwriter/producer duo consisting of John “NoxInBox” Nox and Aaron “Audyo” Dillard. The pair formed during their freshman year of college and have been making music together since. With John on production and Aaron on lyrics, GROUP. is completely in-house; giving them the opportunity to pull elements of genres like hip hop, edm, rock and more to create the “GROUP. sound”. Similar to big names like Smino, Kyle, Chance the Rapper, and Lido, GROUP.’s style can be described as “fun music that makes you feel”. The sound belongs to everyone; from the classical listener to the deep trap listener to the hip hop fan, GROUP. covers all of the bases. In their first year together, GROUP. released 2 EPs, Yesterday, I and Crystals, along with 5 singles. In addition to putting out tracks, they also have opened shows for artists such as Noname, Smino and Gavin Turek and continue to play shows and festivals around the Minneapolis area. At the beginning of August 2019, GROUP. Released their debut album, Maybe Next Time, including singles, Will or Won’t and Pancakes. Working exclusively between the two of them, GROUP. has made waves in the midwest music scene.