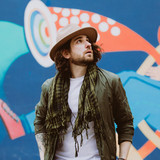 He may look like your average tatted up boy-next-door, but Manitoba’s Tyler Del Pino has always found it a little difficult to fit in. Perhaps it was growing up as the son of a police officer while grappling with his own convictions for the need of systemic change; or his tendency to overanalyze his surroundings and challenge deep-rooted norms; Perhaps it's the polarizing effects of obtaining a music degree, then working as a middle school teacher to pay for the obsession of perfecting his craft - whatever the reason, there’s something that separates him from his counterparts while earning the recognition of those he’d least expect. Tyler Del Pino, has a pure passion for songwriting and an honest sound infused with starry-eyed narratives; a hybrid of alt-country, Americana, and East Coast folk-rock that stays true to the roots of timeless tunes. File him beside James Taylor for his classic songwriting, Keith Urban for his polished precision, Mumford and Sons for their anthemic sing-alongs, and Strumbellas for thoughtful themes and rosy melodies, born and bred in Canada. Keep your eyes and ears peeled for this charming, Canadian troubadour.