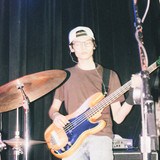 Spoonuel (he/they) is the solo project of Sam Poon, a 20 year-old NYC based actor/writer/producer/multi-instrumentalist. Spoonuel has been producing and recording music from his own bedroom since he was 14 years old. They have been singing since they were born and has been a professional actor most of their life. He has been producing, recording, and mixing songs for his girlfriend, visual artist/photographer/singer-songwriter Chloe Berry since they met in 2018. Additionally he has multiple collaborations with Owen Ragland aka Whitworth, Wes Grey, and McGovern. He has also sang backup vocals for Train and Foster The People. As of 2021 he has sound engineered for artists like Michael Lepore and The Braganza Sisters.   His hip hop / beats producer alias is Neu Loops, and you can expect a beat tape soon.  Listen to their new song ‘Don’t Piss On My Leg’ by Skylar Symone, produced by and featuring Spoonuel.