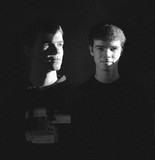 Despite the exotic origin of the name of this new artistic project, Yugen Kala emits its sound message from the Galician Atlantic coast. Formed by two young people who began crawling through the recording studio of his father, ( Engineer / Producer and owner of a venue) .Therefore they had grown up between mixers, synths, musicians, instruments and all kinds of analog junk. It is not surprising that they are truly passionate about music. It does surprise a maturity and bet without complexes for abstract sounds within the most avant-garde and underground electronica.   Common as avid listeners and spectators of festivals such as Sónar, MIRA, WOS, Semibreve or Sinsal, their first mixtapes, are full of energy and loaded with a multitude of styles, dark electronics and arid gear poly-rhythms, where technique and good taste is transmitted from the minute one, their passion and love for the music immediately attracted attention, because of their unconventional style, some of them reaching the number 1 of the mixcloud platform charts, and since then they have appeared in well known radios such as Red Light Radio, Operator Radio, Red Bull Music Mix...     ✨✨✨✨✨✨✨✨✨✨✨✨✨✨✨