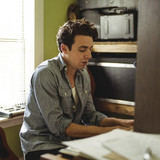 A singer-songwriter known for his lyrical acumen and plaintive harmonica style, Joe Pug dropped out of college and moved to Chicago where he worked as a carpenter before breaking into the city's music scene.

Since 2008 he has released a string of critically-acclaimed albums and toured heavily in the U.S. and abroad.