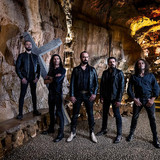 MOONSPELL is approaching their 30th anniversary as a band more ambitiously and stronger than ever!!!

13th studio album is coming, its title is Hermitage and it will be released on February 26th 2021 via Napalm Records. While the world is struggling in the dark, MOONSPELL’s forthcoming album was recorded by Jaime Gomez Arellano (Paradise Lost, Ghost, Sólstafir ) at the Orgone Studios in the UK. Formed back in 1992, the Portuguese Wolves soon became a household name in the European Metal scene, penning their chapter on the book of extreme music with the now legendary Wolfheart and Irreligious. Oblivious to anything else than their own musical pursuit, the band turned itself upside down changeling their semper fi fan basis to albums such as Sin, The Butterfly Effect or Extinct. Entering the winter of their lifetime as a band, Moonpell is now formed by founding member Fernando Ribeiro (vox), his oldest partners in crime Pedro Paixão (keys) and Ricardo Amorim (guitars), later joined by bass player (Aires Pereira) and Hugo Ribeiro, drummer, the newest wolf to join the pack. Moonspell is now committed to make every note, every word, every minute count and they are working and releasing their best music ever, a sign of