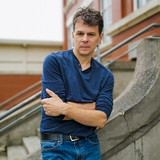 "Reminiscent of 50s and 60s garage band rock, but with a good dose of modern sensibility" is how one would describe the music Canadian artist Rich Chambers has been writing, recording, and performing for his entire 20+ year music career. Following on the heels of his successful 2020 Christmas album, which featured the hit "Snow Miser vs Heat Miser," Chambers has been consistently and methodically releasing new original music throughout 2021. His socially conscious rocker, “I’m So Tired,” came out in January, accompanied by a hard-hitting, film festival award-winning video brimming with thought provoking social commentary. This was followed in the spring with his mid-tempo, love gone wrong, “Sorry Isn’t Good Enough.” Summertime brought “Summer Looks So Good On You,” a Beach Boys meets Katrina and the Waves fun and sing-alongable offering. His current release, “High School Can’t Last Forever,” is a rocker that merges the sounds of Buddy Holly and Green Day to explore the notion of what really constitutes youth and innocence. ... and this is merely the beginning! Chambers has countless single and album releases planned for well into 2022 as he sets out to establish himself as the voice of a freshly new form of vintage Rock n' Roll for the 2020s!