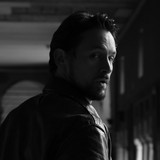 Gutter Sparrow is the solo music of John Mosloskie. John was the principal writer and singer for his band Holler Wild Rose untill 2011 when they ceased activity. At that point he began touring and recording as bassist for Ben+Vesper and The Loom, and shorter stints as guitarist/keyboardist for artists like Jesse Marchant, NLX, Heather Woods Broderick and The Building. In 2017 he relocated from Brooklyn, NY to Roma, Italia where he continues to write new material.