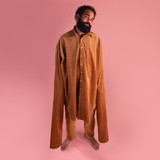 Corduroy Brown is a poppy, rock performer from Huntington, West Virginia. His band emerged out of the pandemic as a group of old friends who just wanted to make music together and feel better about life in a time of uncertainty. Of course – the road to this band was not always easy. Mental health struggles dominated the early history of Corduroy, and fueled the inspiration behind a lot of the songs . In February, Corduroy Brown died in the ICU due to a rare reaction to Covid called MIS-A,

but survived. It reset his perspective and allowed him to really dial this project in and gear up to take on the world. Now themes of mental wellness and a willingness to be better fuel their work and guide them in a new mission to lift up those around them. From the sorrows of tragedy has emerged a new and potent life. With their debut album out August 13th, "Let Me Know"