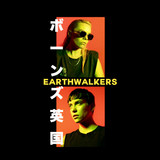 BONES UK are on a mission of intent. “We want our music to empower, to make you feel like you’ve found your home, your gang, your army,” the London raised/LA based duo confidently assert. “We want to help you get out of bed in the morning - to be proud of every scar or beautiful imperfection, on or inside your body. We want our music to make you stand on your bed and scream “FUCK FITTING IN!”” Made up of vocalist Rosie Bones and virtuoso guitarist Carmen Vandenberg, the newly GRAMMY-nominated BONES UK don’t waste a second of their self-titled debut album, confronting everything from the beauty industrial-complex to toxic masculinity and music-scene sexism; embedding each track with choruses primed for passionate shouting-along. In between such epic tours and award nominations, the band have amassed further notoriety for their parties and various curated events hosted in across multiple global cities, each one a celebration of inclusivity and letting one’s inner ‘Filthy-Freak’ fly! They are also due to release their own 29 minute short film in January and are busily plotting their ways to use the upcoming film festival circuit as another vehicle to spread their gospel to an even wider audience. From all this, BONES UK might seem like a band who are already quite far along with their mission, but spend any time in their presence and it’s easy to see that these girls are only just getting started…