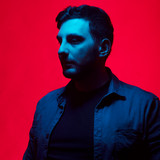 A multi-talented musician, The Golden Hour is orchestrated by Matteo Zandonella Bolco, bringing Retrowave Synth-pop music into the world by his desire to motivate, inspire, and comfort his audience while spreading love and joy to all who hear it.

In creating music directly from the reflections of his experiences, The Golden Hour builds multifaceted songs, holding more serious undertones than at first listen. These songs push the boundaries of perception while inspiring and driving listeners to introspective conversations. Each piece is its own discussion, designed to turn memories and even sorrows of the past into light for the days ahead. The Golden Hour is influenced by a wide array of musical talent, accrediting pivotal influences to The Midnight, FM84, Timecop 1983, as well as The Cure, New Order, U2, and Blink 182. In addition to its 80’s influenced Retrowave Pop style, music is emboldened with a sense of “Natsukashii,” a Japanese term roughly translating to 'nostalgia for a past that never was.' Beyond the bright style that sets this work apart from contemporaries, a way to new expression is being paved. It may not be the music that 'changes the world,' but it certainly is the new expression that will change the people of the world.