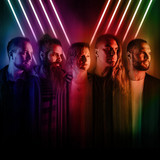 If there is one word to describe Voyager’s most current form, it is colourful. After years of evolution and amassing worldwide influences that mould the Perth quintet’s unique sound, Voyager have truly come into their own in recent years, crafting a path of success both on and off stage. The genre-transfiguring act blend new-romantic and 80’s infused vocals, keytar solos, technical yet melodic fretwork, groovy bass and bombastic drumming efforts. All of which make Voyager the pop/prog/power/rock/metal force that they are renowned as today. VOYAGER explode like a supernova onto the worldwide stage with their new album ‘Colours In the Sun’. The Australians radiate an ultra-modern and prismatic hard rock that delivers on their promise of “epic electro progressive power pop metal.” Each of the albums ten tracks are bright, vibrant hook-laden affairs that resonate long after listening. VOYAGER deliver the perfect storm of modern hard rock song craft, and ‘Colours In the Sun’ is a vivid, uplifting, and exhilarating album experience. Having toured the world a few times over and having shared the stage with names such as Deftones, Opeth, Leprous, Nightwish, Coheed and Cambria, as well as headlining a number of festivals including opening the main stage at Download Festival Australia 2019, Voyager are back with a taste of what’s to come.