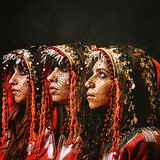 Explosive sets, electronic-instrumental crossover, funky and eclectic sounds: The worldly cosmopolitan living in Vienna, Ulf Lindemann aka [dunkelbunt] who as DJ, soloist, producer and bandleader has set out a genuinely transglobal musical agenda and for over 20 years has been one of Europe's most innovative leaders of the electronic and world music scenes. Whatever the pulse of the current club music scene that inspires the DJ, the composer transforms it with his international band into contemporary musical statements about how WORLD | MUSIC sounds today: 15 languages on stage, transglobal sounds from oriental to western merge with electronic beats to form an intelligent and energetic mix and guarantee a passionate live experience. Person: [dunkelbunt] aka Ulf Lindemann is a producer, DJ and bandleader. Born 1979 in Hamburg, living in Vienna since 2001. Degree in Piano and Keyboard Instruments at the University of Music and Performing Arts, Vienna History: [dunkelbunt] has been a pioneer of the „Balkan Beat“ and „Electro Swing“ genres since 2001 . His international breakthrough came with the Balkan-Hip-Hop single „The Chocolate Butterfly“ ft. Raf Camora (2003) and the Electro Swing follow up hit „Cinnamon Girl“ (2007). The album „Mountain Jumper“ (2015) was awarded the ORF „Album of the Year 2015“. [dunkelbunt] + Band is a internationally booked live act in the genres of „World“, „Global“, „Club“, „Balkan Beats“, „Electro Swing“.