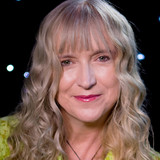 Aly Cook is a Multi award-winning recording artist with a deep passion for all things musical. She is a consummate songwriter and performer, who has taken her music to the world, delighting audiences and carving a career as a respected live performer. Although based in New Zealand Aly has had one foot either side of the Tasman for many years, touring the length and breadth of Australia as she has in her homeland. Many songs of both countries and its people have fallen from her pen. Aly's latest release, 'Caught in the Middle' was recorded at Asquith Studios by Graham ‘Buzz’ Bidstrup and David Nicholas. The musicians on the record include members of ‘The Tracking Crew’ with Buzz on drums, Rick Melick keys, James Gillard bass and the late Glen Hannah on guitar. Others who helped out were Dean Ray on acoustic guitar, Clive Harrison bass, George Washingmachine violin, John Kaldor pedal steel. Asquith Sessions singer Jon Abo joined Aly , Buzz & Kay Bidstrup on backing vocals. As a special treat, a couple of songs feature guest vocals from a long time friend of Aly’s multi award winning artist Sharon O’Neill.