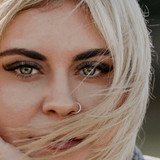 Ellie Drennan is a singer-songwriter from Central Coast, NSW. After finding early success on national television, Ellie took time away to further develop her songwriting, and to find her authentic voice as an artist. Now, three years since her latest release, Drennan has returned to the music scene as an independent artist, armed with a new EP of tracks co-written and produced by indie/folk duo Winterbourne. The first track to be lifted from Ellie's upcoming EP is 'TAXI' which was released on 25 October 2019, with a new EP due in 2020.