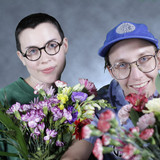 Partner is funny, but not a joke. Gay, but not for each other. Lucy and Josée formed Partner in the spring of 2014. They were looking to experiment with genre, discuss being gay, and share some jokes and ideas. Their objective has remained the same over the past six years, although in that time their sound has shifted considerably. Their debut album In Search of Lost Time (2017) made an impact with its big guitars and polished sound. The record, mixed by Chris Shaw (Ween, Bob Dylan, Cheap Trick), landed a spot on NPR’s All Songs Considered, along with Stereogum, Noisey, Exclaim, CBC Music, Indie 88 and many more best of 2017 lists. The album was shortlisted for the Polaris Prize, and Partner were the recipients of the SOCAN songwriting prize for their song “Play the Field”. Partner’s follow-up EP Saturday the 14th found the duo embarking on bolder and more playful compositional excursions. Throughout this highly experimental period, ideas for the next album began to coalesce. In the summer of 2019 Lucy and Josée joined all-star drummer Simone TB (US Girls, Highest Order, Darlene Shrugg) in the studio to create their second full-length album, titled Never Give Up. With Never Give Up, Partner return to their classic rock roots and awaken their truest gifts to deliver their most exciting, riff-laden effort yet.