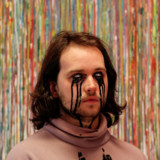 A bedroom pop star born overnight online after his first releases racked up millions of streams, Yung Heazy aka Jordan Heaney released his highly anticipated debut LP “Whenever You’re Around I Hate Everything Less” on June 1st 2018 which has now had over 14 million streams. The album had an embracing reception on college and alternative radio charting on the NACC, Sirius XM and in regional markets. The group spent the remainder of the year on the road with their wild live show playing over 80 concert and festival dates in 10 countries in three continents. Drawing strong comparisons to acts like Mac Demarco, The Beatles and the current wave of bedroom pop indie acts like Cuco, Clairo, Rex Orange County and Gus Dapperton, Heazy’s music melds psych and pop with endearing lyricism and harmonies.

The world awaits what’s next from this exciting new talent.