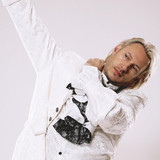 Leo Spauls is a Swedish musician based in London who started his artistic career in theater with childhood friends just outside of Stockholm. Having written pop songs for over 25 years, Spauls released his debut album in 2016 and his second release, a collaboration with David Bowie’s pianist Mike Garson, will be out on July 6th. ”Mike has been an idol of mine ever since I heard him play on 1974’s David, Live in Philadelphia album, the first record I ever bought. Being a trained pianist myself, I don't know anyone who combines classical and jazz influences as he does. It's very inspiring to see what other people can do with your music, as long as you feel confident in what's going on. I wanted to see what other people could do.” Spauls’ debut EP Alla dagar jag väntat (translated to ‘Tired of Waiting’) was recorded with the urge to have full control over the project. Now moving forward and working in collaboration with several artists, he’s let go. “I was at a point in life where I needed to decide whether to give this a try, or just bury it forever. It had been so many years since I started writing music.” The beautiful melancholic crooning of Leo Spauls captures the yearning of our age: love scorned and a desire unfulfilled. This record signals an end, perhaps a mourning of a moment in time, but also ... a new beginning for listeners, and for Leo’s spirit.