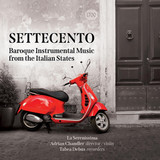 La Serenissima was formed in 1994 for a performance of Vivaldi’s La Sena festeggiante and has since won over fans for channelling the beating heart of 18th century Venice through its music. The group’s vision to enrich life by sharing its passion for Italian baroque music has taken it all over the world to leading venues and festivals. Their music is underpinned by research and in-house performing editions, reaching a global audience through live concerts, recordings and outreach. The ensemble’s recording work has won two Gramophone Awards (2010 & 2017), topped the UK Classical Chart (2018) and been featured in international film, television and advertising, including for the 2020 film Portrait of a Lady on Fire. Driven by the passion and determination of violinist Adrian Chandler, a native of Merseyside, the group has proved its scholarly credentials whilst winning over audiences with its broad appeal and creative album concepts. La Serenissima is proud to have the support of Honorary Patron, His Excellency The Ambassador of Italy to the UK. ‘They really put the rock into baroque!’ Classic FM