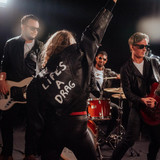 Purple Thread are a 4 piece glitter-drenched rock n' roll band from Leeds known for their eclectic brand of blues infused guitar pop. Consisting of Liz Mann (vocals and guitar), Jack Tildsley (guitar), James Foreman (bass), & Ryan Bailey (drums), the band lead their audiences through a genre-defying sea of gritty, groovy noise, rattling their way through blistering live performances up and down the country. Prone to the odd mid-song poetry break, mean riffs, & inescapable hooks, Purple Thread are rapidly forging a name for themselves as one of the most energetic and captivating live bands on the circuit. With multiple international radio plays, an on air interview from BBC Introducing West Yorkshire, a DJ set from Alan Raw at the 'Life's A Drag' single launch, support slots for bands L.A. Witch, Skating Polly & Hands Off Gretel, festival slots in Camden, Devon, Derby and Leeds & a 'Something Good' single launch show co-hosted by Gus from alt-J, the band is going from strength to strength & showing no signs of slowing down. In April 2019 the band signed with Monomyth Records & released ‘I’m All About You’ on the label in June 2019. The single received high praise both nationally and internationally, was played on multiple radio stations & added to numerous Spotify playlists including This Feeling's ‘Best New Bands’ playlist. 'Back To NYC' was released on 22nd November, & is an exploration into the depths of raw, feminine empowerment at its grittiest and most seductive.