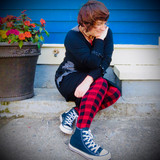 “It’s easy to fall for the eclectic sounds of this creative mastermind, and you will probably get lost in your imagination while falling.“ (Rock Eden Magazine) Rozalind MacPhail is a Newfoundland-based performer, recording artist, film composer, inspirational speaker and music educator. A classically-trained flutist, MacPhail layers electrifying flute loops, moody vocals and driving electronics through her effects pedals and the digital audio workstation, Ableton Live. She explores new ways of combining image, inspiration and sound in audio-visual works that speak honestly of people, place and the human experience. One of the world’s most buzzed-about Gemeinhardt artists, MacPhail has received multiple honours and awards including an East Coast Music Award for Electronic Recording of the Year and MusicNL‘s Female Artist of the Year. She‘s currently showcasing her internationally-acclaimed audio-visual creation, DON’T LET ME FALL TOO FAR and keynote concert, INSPIRATION SOUP. MacPhail grew up in Canada on a small group of islands nestled in the harbour of Toronto, Ontario called Toronto Island. She has lived in many parts of Canada but it was the artistically vibrant city of St. John’s, Newfoundland that stole her heart.