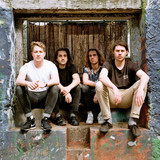 Tawnee are a Zurich indie rock band with roots in Graubünden. In 2012 they got together to play their first gig at the legendary Rock ʻOz Arènes. Andrea, Elias and Janic still don't know what it really was like for the listeners, but the three guys had the time of their lives and knew: We don't want to do anything else. With their first single 'Jamie' Tawnee made it onto the radio, into the iTunes charts and gained their first live experience. 2015 followed the first EP called ʻLoversʼ and with it more songs on the radio. Reinforced by bassist Valentin Bezzola and new drummer Florian Heiniger, Tawnee played gigs at Zermatt Unplugged, Bierhübeli Bern or Grabenhalle St. Gallen. With a growing live routine, the four guys also felt the need to leave the youthful folk pop behind them. On their second EP 'Paradise' it becomes clear that acoustic guitars had to give way to harder sounds and that heartache was replaced by social criticism. What has remained are hymnic choruses, danceable beats and an energetic live show by four guys who would love to do nothing else.   In 2020, Tawnee are working on their debut album. Their latest single Untied is out on 17 January.