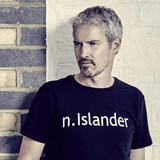 Scotland's Mull Historical Society is the project of singer, songwriter, and multi-instrumentalist Colin MacIntyre, who broke onto the U.K. charts with the band's debut, Loss, in late 2001. A unique blend of warm chamber pop, jangling indie, and crafty sonic pastiche, MHS continued to evolve throughout the 2000s with releases like Us (2003) and This Is Hope (2004) before MacIntyre shelved the project to make a proper solo album at the decade's end. Reviving the band in the 2010s, he also began a tandem career in fiction, publishing a novel in 2015, then returning to pop music with a pair of MHS LPs including 2018's Bernard Butler-produced Wakelines. A native of the Hebridean island of Mull, MacIntyre adopted the MHS moniker after seeing it printed on an advertisement in 2000. At first signed to U.K. independent Tugboat, MacIntyre got to work on cranking out some of his extensive bank of backlogged songs. The warmly received "Barcode Bypass" single was released later in the year and named Debut Single of the Year by NME. A handful of additional singles pre-dated MHS's full-length debut, Loss, which arrived via the Blanco y Negro label in October 2001. Inspired by both his upbringing on Mull and the sudden loss of his father in 1999, MacIntyre's unique indie pop pastiche was warmly received by critics and fans alike, climbing to number 43 on the U.K. charts. Support slots with Elbow, Delgados, R.E.M., and the Strokes followed as MHS' exposure widened. His follow-up, 2003's Us, followed a similar stylistic tack employing a multitude of instruments, craftily orchestrated pop, and evocative maritime samples such as the B.B.C. shipping forecast. Although it too was well-received critically, MacIntyre was dropped from the Warner Bros. roster not long after its release. An extensive trip to the U.S. helped inspire 2004's This Is Hope, the third LP under the MHS banner and first for London indie B-Unique. Working with Lemon Jelly's Nick Franglen as producer, MacIntyre shelved the MHS name for his first proper solo album, 2008's The Water. The album was written in his wife's home city of New York. After a second solo release, 2009's Island, the project name was revived for 2012's City Awakenings, the fourth MHS album and sixth overall from MacIntyre. 2015 saw the release of The Best of Mull Historical Society, an anthology of MHS' first 15 years. That same year, MacIntyre made his debut as a novelist with The Novels of Ivor Punch, a book set on the island of Mull. A new MHS album, Dear Satellite, arrived the following year in the spring of 2016. Working with Suede guitarist Bernard Butler as producer, MacIntyre returned to the studio for MHS' eighth album, Wakelines, which was released in September 2018. ~ Timothy Monger & Andy Kellman, Rovi