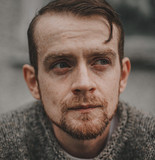 Irish singer-songwriter Paul Caldwell has the ability to seamlessly blend the soul of traditional Irish ballads with the nuance of Canadian folk. He grew up with Celtic music echoing through the rugged coastline in his hometown of Buncrana and these traditional Irish tunes have reverberated deep into his soul. Paul moved to Vancouver when he was 25, and although he feels a strong bond with Canada, he always carries a piece of home with him. His upcoming EP “Headlines” is a deeply emotional record, subtly evoking, nostalgia, heartache and hope. It was recorded by Vancouver based Producer Jeff Zipp, at Light Machine Records. The first single and title track, is a song that came to Caldwell during the pandemic. “Headlines” tells the story of two boys, from Caldwell’s hometown in Ireland, that were killed in the Omagh bombing in 1998. Paul Caldwell's second single “Monday” is an emotional, introspective piano ballad. The singles have amassed 40,000 streams on Spotify, and Caldwell has received radio play on CBC, Dublin City FM. He was recently voted into the Top 100 of the coveted CBC Searchlight competition, for his song “Headlines”. Paul's upcoming third single "Every Time" once again showcases his dynamic songwriting, opening as a stirring piano driven number, the track progress's into a rousing folk-rock hymn. "Every Time" will release June 25th, on all major streaming platforms.