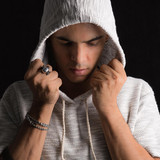 Experienced, creative and remarkable, Gustavo Rique provides his audience with a unique and unprecedented experience for those who do not know him and surprises those who have had the pleasure of participating in his presentations. Influenced by artists such as Matador, KINK, Paride Saraceni, Monika Kruse, among others, Rique is a percussionist musician graduated from UFMG, music producer by the Order of Musicians of Brazil (OMB), Brazilian Union of Composers (UBC) and Dj to over 10 years. Having worked for major bands on the national scene between 2000 and 2009, in 2010 he devoted himself exclusively to electronic production, after participating in the Sudaka tour, with Argentine musician Ramiro Musotto in 2008, making his productions start to show a sound unique and very straightforward to the essence of true Techno. Over the years has had stints at events like Minas Trend Preview 2013, 2014. In 2014 took over the music production of Minas Fashion Week. As a producer you have tracks on Techno labels like; Sonik Sound Records, La Rage, Catamout Records and Techno Brothers. Rique is also the founder of the ONLY ONLY Techno label.