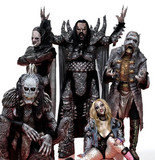 Lordi is a Finnish hard rock and melodic heavy metal band, originally formed in 1992 by the band's lead singer, songwriter, visual art designer and costume maker, Mr Lordi. The band has been touring actively since 2002 and it´s known for the monstrous look and the horror elements in the stage performance and music videos. With catchy songs and screaming riffs, the horrific lyrics will stick in your mind whether you like it or not.   In May 2018, Lordi´s new album slithers onto the scene. Possibly their most controversial album to date, the 9th studio album, SEXORCISM, is a full on and uncensored shot of Lordi brand hard rock and roll.   Mr. Lordi (vocals), Mr. Amen (guitar), Mr. Hiisi (bass), Mr. Mana (drums), Ms. Hella (keyboards)