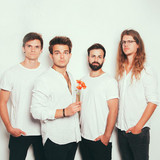 For Mike Stone, singer and front man of the Augsburg band *Art in Crime*, love has always been an important part of his lyrics. Their music is characterized by powerful emotions, a very sensitive and smooth rhythm section as well as melodious and refined guitars. *Art In Crime* went to the first Gaffa Tape Sessions in Dublin in 2017. Radio Bayern 3 discovered the band in 2018 and named them "Band of the Week" within the framework of the "Bayern Demos" and presented them extensively on air. *Art In Crime* soon expanded their fan base when they supported the Canadian band Current Swell. *Art in Crime* conquered the hearts of the audience at the Emergenza band contest and won the "Best German Band" award at the World Final 2018. In the review you can read about a "goose-bump inspiring performance from the rhythm section and the guitars to the vocals..." The fans have been celebrating their heroes since then at numerous events such as the Modular Festival, the Augsburger Sommernächte, the STAC Festival, the Streetfood Festival, Kulturina, Kultstrand and the Living Room Sessions. The musicians are just as impressive on their electric instruments as they are acoustically with double bass and mandolin. Every concert is an amazing and real experience with incredible dynamics. Radio BigFM put the band to a gig at Rock am Ring.