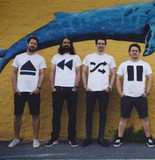 "There's a lot of rock in Norwegian out there. All of them with their own thing going on. But no one's like Påls butikk." - Disharmoni   Påls butikk is referred to as a Foo Fighters in Norwegian, but also known to be an eclectic rock band.   After the formation in 2015, Påls Butikk has released an EP and a number of singles, as well as the albums Duft Fornuften (2016), Inn I Sammenhengen (2018) and Dpressr (2019)   The band has given lots of concerts, amongst others at Øyafestivalen's Klubbdag. And they've been working with the reputable record label Drabant Music and producer Nick Terry.   I May 2020 the band released a double single Martes vise // Østmarka nasjonalpark. And the 25th of August Påls butikk released the single "Venter".