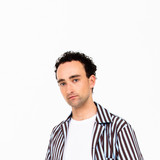 Wave Racer -- born Tom Purcell -- is a producer and DJ from Sydney who crafted effervescent electronic tracks influenced by disco and late-aughts French electro. Named after a Nintendo 64 game, Wave Racer was formerly part of a duo, Pablo J & Lobsterettes, which planted the seed for his disco-house flair. His sound, often classified as "future" and "neon," burst with playful energy and brightness, akin to a Japanese anime soundtrack or something heard on a dancing video game. His debut single, "Rock U Tonite" b/w "Stoopid," was released in summer 2013, which led to an increase in remixes for other artists. He signed with Australian label Future Classic (Cashmere Cat, Flume) and released his Flash Drive EP in late 2015, which featured guest appearances by Lido and Baby. ~ Neil Z. Yeung, Rovi