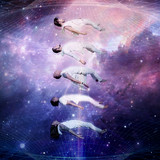 NORMUNDY is a spirited group which combines rock, rap, and EDM into a distinct sonic experience. Drawing influence from across the musical spectrum, the Indianapolis-based band delivers powerful lyrics, genre-breaking soundscapes, and a fiery and infectious live energy wrapped in a deep-rooted spiritual message. Founded in 2017 by singing vocalist Joshua D-Day, NORMUNDY has undergone a foundational metamorphosis since its conception. What started as an endeavor to craft a unique signature sound through innovative genre-blending and fearless lyricism morphed into a vessel for conveying a critical spiritual message. This message, which spreads awareness of “The Connection,” is now the essence and lifeblood of NORMUNDY. “The Connection” is the interconnectedness which physically and metaphysically unifies everything in our Universe, and the band’s music and live performances are meant to contextualize how this interconnectedness plays a role in our lives. Backed by a driving purpose and a clear vision, NORMUNDY’s founder is joined by brothers in arms BVNE on rapping vocals, Cody IX on guitar, Jake Gulla on bass, and Andrew Taylor on drums. The group endeavors to carry its sound and message far and wide through engaging, high-energy performances. Now in its second album cycle, NORMUNDY is taking the industry by storm with a dedicated following which mirrors the passion of the band’s members. The group released its second full-length record "Enter The Void" on Sept. 24, 2021.