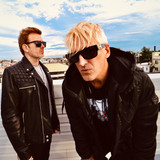 The new single "Little Dreams" by THE MODEL is out on September 10th, 2021.   THE MODEL is an American electronic music band, composed of founding member Markie and longtime collaborator and DJ Justin Paul. While their origins are to be found in philosophic-kraut-pop parties held in late ‘90s Philly warehouses, THE MODEL went on to record and release two studio albums. Darkness Within Darkness, released in 2003, was made from the soundtrack of the band’s performance art pieces. In 2008, Markie worked with visual artist and electronic musician Johnny Woods to record @Physical, which was later released on Playloop Records, a label co-founded by Justin Paul. It was on Physical that the band embraced more traditional ideas of song structure and arrangement, as well as the sounds of their youth. Physical was given a generally favorable reception among fans and press in both Philadelphia and New York, and reviewed in national and international magazines and sites. The music was described by one reviewer as “a perfect example for dance parties” of “new-wave synth played very well." Some considered the record to fall somewhere between Fischerspooner, Pet Shop Boys, and INXS. Markie’s vocals were compared to Michael Hutchence and Dave Gahan (“only lacking the self-loathing”), while another reviewer interestingly described his singing as “the jaguar/hound dog cousin of a David Bowie/Grace Jones lovechild.” Markie went on to co-write and produce several albums for Class Actress.