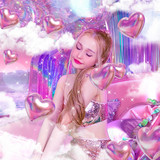 Tea Wagner is a singer, actor and songwriter going by the artist name of Tea Belle. She was born and raised in Vienna, Austria where she grew up being trained in acting, singing and dancing and performed in local musicals, films and commercials throughout her youth. She then spent years studying and working as an actress in Los Angeles as well as London before fully tapping into her passion for music. In early 2020 Tea made her comeback as an artist with her single “Available(nah)” which drew attention for its colorful music video and even made it to the radio. Her work on the soundtrack for the short film “Stay Sane” earned her over 14 Awards for “Best Original Song” at various international film festivals so far. As an actress she has starred alongside Mark Hamill in comedian Bert Kreischer’s Hollywood Blockbuster “The Machine” as well as in projects such as ZDF’s “Tonio & Julia” on German TV or the Bollywood movie “Jawaani Jaaneman” next to Saif Ali Khan. The young artist also works as a topliner/songwriter specializing in the asian music market where she has had releases with artists such as Solji from Kpop group EXID. Taking inspiration from international pop culture all around the world, she describes the sound of her own music as “just as diverse and limitless as me”. The same thing goes for her writing where Tea is known for her catchy melodies.