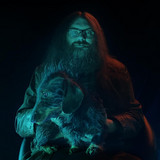 The new release from LAKE OF TEARS is the perfect soundtrack for short, grey days and long, cold, dark nights. After nearly a decade of silence, Daniel Brennare, head and heart of the Swedish pioneers of dark music, finally reveals his sinister world of thought. Out of long years and intricate mathematics comes Ominous. Rooted in illness and depression, in days of grey. These moments, burdensome and overwhelming, are dissected and then reassembled into a linear story. Interwoven in sound, word and vision, with thought out precision. Lasting no longer than a morning but holding an eon. Reaching no further than to the horizon but holding a cosmos. Brennare creates his vision at the end of the world, starring the cosmonaut and the ominous brothers. He combines gothic rock with post-punk tunes, and quiet melancholic sounds that grow into powerful tracks, heavy and glutinous as liquid bitumen. Unhindered by the contemporary rules of form, LAKE OF TEARS present songs of unprecedented independence of mind. The foreboding of a coming doom is embedded in the words of Daniel ́s warm, fragile voice. “Ominous” was recorded and mixed in Studiomega in Sweden by Christian Silver and his team, and produced by Daniel Brennare.