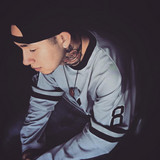 Lorenzo Espinoza, known professionally as LiL Renzo, is an American rapper, singer, songwriter and music producer. Growing up in the small town of Taos NM with nothing much to do, he quickly took to music. After watching his father make a beat on his computer one afternoon, LiL Renzo explains, he knew he wanted to make music. "It looked like he was playing a video game, and I wanted to try" says LiL Renzo. He later went on to make his first beat at the age of 12 and recorded his first song at the age of 13.