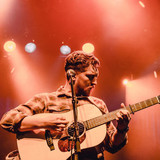 Tyler Childers envisions Country Squire as a “working man’s country album” – one that captures a relentless work ethic, a happy marriage, and a sly sense of humor. “I hope that I’m doing my people justice, and I hope that maybe someone from somewhere else can get a glimpse of the life of a Kentucky boy,” he says. Country Squire comes exactly two years after Purgatory, a breakout album that’s kept Childers constantly on the road. For the new project, he reunited with Purgatory producers Sturgill Simpson and David Ferguson, recording nine songs in just two days. “I don’t know how to explain it any other way but I wanted it to feel like an upper,” Childers says. “I was listening a lot to Allen Toussaint’s Southern Nights and Jim & Jesse’s Diesel on My Tail. You listen to that album all the way through and it’s driving, it’s going, and it’s not stopping.”