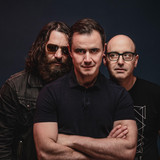 Toronto based live electronica band The New Deal have released “Isolation Suite”, an EP of new music that was written, recorded, and mixed in isolation during Covid-19 quarantine. In contrast with the group’s first ‘TND3’ albums with new drummer Davide Di Renzo, which were all improvised, Isolation Suite is composed, with each musician having recorded their part separately in their respective home studios. The New Deal first began in Toronto in 1999, quickly gaining support from Toronto’s underground club scene as pioneers in electronica, recreating the DJ experience with live, improvised music.

Soon the band brought their interpretation of Electro House, Trance, Breakbeat and Drum & Bass to the US where they were embraced by the crowds at NYC’s Wetlands Preserve and cultivated a loyal following in the American jam scene.