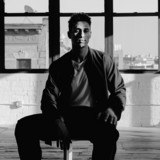 S. Raekwon, born Steven Raekwon Reynolds, is a singer/songwriter and producer from New York City by way of Buffalo, NY. The S. Raekwon project finds Reynolds documenting traces of a life both affected and infatuated by the power of difference. Recorded between New York City and a six-month stint at his girlfriend’s parents’ home in Edwardsville, IL during the pandemic, Where I’m at Now is the album S. Raekwon made for himself with a clarity that arrived as he located his missing pieces in the world. Completely self-produced and self-recorded, the music’s driven by the relentlessness of the East Village and the quiet serenity of Edwardsville. The abstractions of his earlier musings transform into a warm wave of genreless coherence, drawing influences from across R&B, rock, folk, and pop to build a record that shines in its quiet spaces as much as its sweeping movements. Simply put, Where I’m at Now is an album where S. Raekwon is no longer invested in hiding. These records don’t contain answers, but signals toward what feels like the right direction. The roaming child, painfully aware of his difference and eager to understand it, is now a man walking tall on the path to knowing himself. Through his journey - of Blackness, of love, of pain and perseverance - he grants us permission to walk tall all the same. This music serves as a gentle, yet intentional reminder that we only need to be who we are in the moment, and we’re worth becoming who we know we can be.