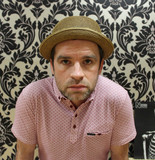 Gordon Barry is a singer/songwriter from Wexford, Ireland. He has performed with an array of international acts & featured in publications such as The Wall Street Journal and Hot Press Magazine. In 2014 Gordon released his debut EP ‘Sojourning' & while touring in the US, he met renowned country artist Steve Earle who invited him to take up a scholarship role at his school for songwriters in the Appalachian Mountains. Having played alongside acts such as Earle, The Blind Boys of Alabama, Marah, Mick Flannery & more, Gordon then released his debut album in 2017. Titled 'The Best Way To Kill a Monster' it was recorded both in Ireland & the US and was mixed by legendary Seattle Producer Steve Fisk, who was the man behind the wheel of early recordings by Nirvana, Soundgarden and a whole host of acts that sprung from the Seattle/Sub pop era. The albums first single 'Devil & St. Jesus' was released and went on to win the top prize for lyrics at The 2017 International Songwriting Competition in Nashville. An annual event which is judged by Tom Waits,Rickie Lee Jones and many more, The ISC is considered the most prestigious songwriting competition in the world and according to the New York Times, ‘is the songwriting competition to take note of’. Speaking of the win, The ISC wrote "Irish troubadour Gordon Barry’s work shows that classic lyric writing is alive and well in the 21st century. Gordon's lyrics are certainly worthy of winning 1st Place at this year's ISC competition.”