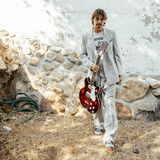 Josh Lippi is an American multi-instrumentalist, songwriter, producer from Sacramento, CA. He has served as a touring musician for K.Flay, Tommy Guerrero, Darondo, Chuck Prophet, Alice Russell & his studio and writing credits include Logic, Richard Ashcroft, Donna Missal, Ray Barbee & more. He is also a group member of The Park, Blktop Project, Lee Bob & the Truth, Los Days, & TK Rhodes.   Lippi released his first solo record Now Open Sundays under Josh Lippi & The Overtimers in 2015, as a return to the garage rock sound that he grew up on. Manzanillo St., his second full length began while Josh was living in Mexico City and is a further exploration into Lippi's Rock & Roll influences. Una Notte a North Beach is a collection of free instrumental songs available via Josh's YouTube page, for artists and creators to use and help inspire their own works. The songs set scenes inspired by locations in the San Francisco Italian neighborhood North Beach, acting as a classic crime movie soundtrack to a film that hasn't been made. The Sacramento EP is a reflective homage to the city where Josh grew up and the local music scene that gave him his start. Recorded in the living room in Sacramento, CA the EP features originals as well as covers of his favorite Sacramento songwriters. On the year anniversary of the California stay home order (March 19, 2021), Lippi released In Quarantine, a Live and raw acoustic EP of candid performances recorded with special guests throughout 2020.