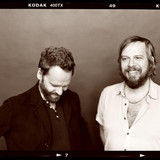 A Winged Victory for the Sullen

Featuring A Winged Victory for the Sullen

A Winged Victory for the Sullen, the collaboration between Dustin O'Halloran and

Adam Bryanbaum Wiltzie . They originally met in 2007, when Wiltzie was performing with Sparklehorse in Bologna, Italy. Backstage, the two musicians struck up a friendship that developed into A Winged Victory for the Sullen, an outlet for what they've termed "harmonic Robitussin." Over the course of two years, O'Halloran (formerly of Devics and film composer) and Wiltzie (one-half of Stars of the Lid) worked on their 2011 self-titled album, released through Kranky and Erased Tapes. Recorded and mixed in German, Belgian, and Italian studios with numerous musicians involved, it was one of the year's most impressive ambient-neoclassical albums. In 2012 and 2013, contributions were made to compilations released by Erased Tapes and Ghostly International, while a track from their self-titled album appeared on the soundtrack for Breathe In -- which featured an O'Halloran score. Commissioned score a piece by a dance company, Wayne McGregor Random Dance, the duo made Atomos, another expansive album recorded in several locations. The pair then went on to make their foray into the world of film composition with Wiltzie releasing his score for the documentary Salero in 2016. The duo also released their first collaborative score as AWVFTS for the French thriller/drama, Iris, in early 2017.