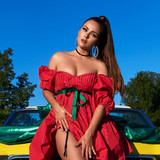 BILLBOARD featured songwriter, the Siberian/Swede Anna Veé had her debut as an independent artist Autumn 2016 and has since reached millions of streams with nice placements on many of Spotifys most attractive playlists such as ”Pop Right Now”, ”Singled Out”, several "New Music Friday"s & The Viral Top 50 Charts in Sweden, Norway, Denmark, Spain & The Netherlands. Medal winner in Pop/RnB Vocals - World Championships in Los Angeles at age 17. 'Swiss Music Awards' selected her as one of only six artists worldwide to perform her versions of Switzerland's most popular songs and she also took part in the German reality TV talent show 'Go Get'em' where they follow the every day life of tomorrows stars.