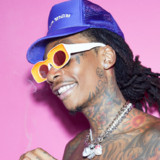 A perfect balance of pop hooks, effortless charm, and stoner rap swagger, Pittsburgh rapper Wiz Khalifa was one of the highest-rising stars of a certain sect of mainstream hip-hop in the 2010s. With a series of hits built around slick rhymes and slicker production, Khalifa moved from mixtapes to stadium sports anthems and even major motion-picture soundtrack collaborations with pop star Charlie Puth. His charm, persona, and weedy wit were in peak form from the time of his major-label debut, 2011's Rolling Papers. A military brat, Khalifa, whose real name is Cameron Thomaz, was born in 1987 in Minot, North Dakota. After his parents divorced when he was three, he lived in various places and military bases around the world. His first attempt at committing lyrics to paper was around age nine, and at 12 he was already recording and producing his own records in his father's Oklahoma studio. Settling in Pittsburgh during his high school years, Khalifa laid down the groundwork for a solo career and kept busy recording music in a local studio, I.D. Labs. He stood out among the studio's regulars, prompting the I.D. Labs' staff to offer him free beats and recording time, plus bringing him to the attention of Benjy Grinberg, a former executive assistant to L.A. Reid at Arista Records who had started up a new independent label, Rostrum Records. Signed to Rostrum, Khalifa built a buzz in Pittsburgh with a few singles, but he began to draw ears nationally during his senior year in high school when his first mixtape, Prince of the City: Welcome to Pistolvania, dropped in early 2006. With the release of his independent full-length debut, Show and Prove, later that year, major publications featured profiles on the young rapper. In summer 2007, Khalifa and Rostrum hopped on board with Warner and Khalifa cut his first major-label single, "Young'n on His Grind." The follow-up, "Say Yeah," climbed into the Top 20 of Billboard's Hot Rap Tracks that same year, but the relationship between Warner Bros. and Khalifa took a turn for the worse. Unable to come to an agreement on his debut album for the label, the rapper announced he was leaving Warner in 2009 and returning to Rostrum for the album Deal or No Deal. The next year began with Khalifa appearing on the cover of XXL as one of the magazine’s Top Ten Freshmen, while The Source named him Rookie of the Year. In April, his Kush & Orange Juice mixtape had received enough press that Atlantic took notice, signing the artist that same month, and in September, his first single for the label, the Pittsburgh Steelers tribute and Stargate production "Black and Yellow," appeared. As the NFL team progressed toward the playoffs, Khalifa's track became their unofficial anthem, and when the Green Bay Packers emerged as the team's opponent for the Super Bowl, Lil Wayne responded with the answer song "Green and Yellow." Khalifa's song topped the charts in February of 2011, while his first Atlantic set, Rolling Papers, debuted at number two on the U.S. Billboard 200 chart a month later. Also arriving that same year was a feature film with Snoop Dogg, Mac and Devin Go to High School, along with its accompanying soundtrack. Two mixtapes, Taylor Allderdice and Still Blazin', landed in 2012, and in early December his fourth album, O.N.I.F.C., was released, featuring a return appearance by production team Stargate, this time working with Benny Blanco on the album's first single, "Work Hard, Play Hard." Khalifa explained in interviews that the acronym title O.N.I.F.C. stood for "Only Nigga in First Class," inspired by the album H.N.I.C. by Prodigy of Mobb Deep. Clean copies saw the abbreviation standing for "One Night in First Class." In April 2013, he released his collaboration EP Live in Concert with Curren$y, which featured seven new songs. Shortly afterward, he announced details of a fifth studio album, entitled Blacc Hollywood, which was released in August of 2014. The mixtape 28 Grams -- designed to act as a primer for the album -- almost saw a delay when Khalifa was arrested for marijuana possession the day before its release that May. However, he was freed within a matter of hours and the mixtape's online stream went ahead as planned. During 2015, his contribution to the soundtrack for Furious 7 became one of the biggest hits of the year; a tribute to the actor Paul Walker, "See You Again," reigned at number one for more than ten weeks (although not consecutively). The hit didn't appear on the MC's 2016 album, Khalifa, but it influenced the more serene and loose set of tracks, including the album's lead single "Bake Sale" with special guest Travis Scott. The album debuted at number six on the Billboard 200 albums chart, while later in the year Wiz debuted at number 26 with TGOD Mafia: Rude Awakening, a collaborative mixtape featuring Juicy J and TM88 and released by Atlantic. The rapper followed with a pair of notable soundtrack contributions in 2016 ("Sucker for Pain" from the movie Suicide Squad) and 2017 ("Gang Up" from The Fate of the Furious). Also in 2017, he delivered the single "Something New," featuring Ty Dolla $ign. Another mixtape, Laugh Now, Flay Later, was issued before year's end. In 2018, he released the single "Hopeless Romantic" with Swae Lee b/w "Real Rich" with Gucci Mane. Both tracks appeared on his sequel, Rolling Papers 2, which arrived that summer. Khalifa returned in February 2019 with the Trippie Red and Preme collaboration "Alright," and revisited his collaborative friendship with Curren$y for the nostalgic mixtape 2009, as well as the cloudy, old-school tinged Fly Times, Vol. 1: The Good Fly Young. These more offhanded and casual mixtape releases were followed in 2020 by the brief but manicured production of seven-song EP The Saga of Wiz Khalifa. In addition to strongly stylized pop production, the EP included high-profile features from Logic, Quavo, Tyga, Megan Thee Stallion, and more. ~ Cyril Cordor, Rovi